Posted by ARTSTRADA MAGAZINE at 11:28 AM No comments:

Tennessee "My Strength" PSA created by Men Can Stop Rape

Posted by ARTSTRADA MAGAZINE at 3:46 PM No comments:

Artsträda Magazine Presents - A night of gothic industrial and dark world electronica from across the ocean, all the way from ITALY! 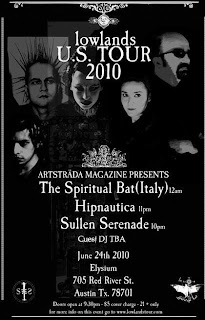 http://www.myspace.com/thespiritualbat
http://www.myspace.com/sullenserenade
http://www.myspace.com/hipnauticamusic
THE LOW LANDS U.S. TOUR LAUNCH PARTY
LIVE MUSIC BY:
SPIRITUAL BAT, an infamous dark world band based
out of Italy launching their first U.S. Tour takes
the stage at midnight
Interview with The Spiritual Bat kainklangmusikmagazine
http://www.kainklangmusikmagazine.com/?p=384
Who is behind everything The Spiritual Bat?
Rosetta: “The Spiritual Bat” is a duo, that is, Dario, composer and creator of the project… and me, Rosetta (Lyrics, Vocals, drum arrangements and sequencing). We like playing with other musicians, as you can see on Through The Shadows… It is an honour for us to have Bruno on the Flute. He has worked with Morricone, with Pavarotti, with most of the great directors in classical music. But he is also the type of musician who likes experimenting other dimensions… Then we also have Alessio Santoni, an excellent drummer who can play any style… I actually played electro-acoustic drums in the previous line-up (Sacrament). But I needed somebody technically better than me to play my own drum arrangements for Through The Shadows, and Alessio was perfect, fast and respectful of my parts even though expressing his personality. Initially, when we had lost all the other band members, Dario and I meant to release all instrumental music, but when last year we set up a recording session for Alessio to play acoustic drums, … I kind of felt I had to find another way to express myself… I got inspired and on a spur of the moment I wrote the lyrics for some of the songs and debuted on my vocal instrument a few months later."
HIPNAUTICA, is a hybrid chameleon which presents their own self titled Dark World Electronic style which combines somber and reverent tones and beautiful harmonies, combined with heavy electronic sequences and beats, and backed by live instrumentation and profound lyrical content. Known for their diverse performances which feature a plethora of live musicians including 2 female singers, viola, cello, tribal drums, live bass and guitar led by the electronics, lead male vocal of Sky and joined by our dark world gypsies, performance artists, and unique custom visual projections. This particular performance will focus on their more somber, down tempo material and escalate in a high energy finale, a set featuring 1 new song and two very rarely performed songs. Including Now, Awakening, and Morbitua.
SULLEN SERENADE from San Antonio will start around 10:00, Robert from San Antonio leads this project as a powerful dark tribal drummer on his first U.S. tour, presenting a somber dark world vibe backed by guitars, bass, live backing tracks, and beautiful belly dancers. Robert invited Hipnautica into this special event because he was once a previous special guest drummer within Hipnautica and the two bands have a sound that compliments each other well.
Also, featuring special guest DJ Edminister.
If you love the more subtle, darker nature of Hipnautica you will love these two great bands as we have chosen to support their first U.S. Tour, on the premier night of their U.S. Tour to start them off right. We will present a great night of DARK WORLD ELECTRONIK, featuring three great bands, and dark world gypsy belly dancers...we hope you come out to see another side of Hipnautica as we support our friends on their first U.S. Tour.
Elysium is 21+
$5 Door open at 9:00pm
All bands will have CDs & other merch available.
Ask about our All Night Drink Specials
& our signature Hipnautica Martini
HIPNAUTICA @ UNTERVELT @ PRAGUE MAY 14th
http://www.facebook.com/event.php?eid=123060864372034&ref=ts
*We can always utilize creative people and helpful hands...if you want to volunteer for any of our events or if you want to help promote this and/or future events we would welcome you to join our Street Team. Contact sky@hipnautica.org for details and benefits.
THE ENTIRE THE LOWLAND U.S. TOUR 2010:
THE SPIRITUAL BAT (ITALY) & SULLEN SERENADE (TEXAS)
June 24th 2010 - Elysium (with Hipnautica) - Austin, Texas
June 25th 2010 - Super Happy Fun Land (with Dead Frail Honesty) - Houston, Texas
June 26th 2010 - The Thirsty Camel (with Happy Death Men) - San Antonio, Texas
July 2nd 2010 - The Hideout (with Strap on Halo) - Omaha, Nebraska
July 3rd 2010 - Bedlam Theatre (Shinto Records)-Dark Carnival(w/Scarlet Slipping & Phantoms of the SS) - Minneapolis, Minnesota
July 6th 2010 - The Darkroom - Chicago, Illinois
July 7th 2010 - Smalls (Darque Productions) - Detroit, Michigan
July 8th 2010 - The Depot - Baltimore, Maryland
July 9th 2010 - Digital Ferret - Philadelphia, Pennsylvania
July 10th 2010 - Club Bohemia(with Amber Spyglass & Dreamchild) - Cambridge, Massachusetts
July 14th 2010 - The Wormhole(Black Oaks Savannah Productions) - Savannah, Georgia
July 16th 2010 - SOUTHERN GOTHIC FESTIVAL - New Orleans, Louisiana
July 17th 2010 - SOUTHERN GOTHIC FESTIVAL - New Orleans, Louisiana
July 22nd 2010 - TBA - Denver, Colorado
July 24th 2010 - TBA (venue change) - Salt Lake City, Utah
July 26th 2010 - Black Monday - Seattle, Washington
July 31st 2010 - Teatro de La Psychomachia (with 100pcs & Danse Perdue) - Seattle, Washington
August 1st 2010 - The Hive - Portland, Oregon
August 5th 2010 - Death Rock Dive Bar - Oakland, California
August 6th 2010 - Ghost Town (with Accolade) Oakland, California
August 7th 2010 - Audie's Olympic (Club Fred) - Fresno, California
August 8th 2010 - The Retox - San Francisco, California
August 13th 2010 - Heretics - Los Angeles, California
August 15th 2010 - TBA (venue change) San Diego, California
MORE DATES ARE BEING ADDED – KEEP CHECKING OUR CALENDAR!

Posted by ARTSTRADA MAGAZINE at 9:49 AM No comments:


Ron Mainse talks to Joy Smith, MP about the issue of human trafficking in Canada and the fact that Bill C-268 has now passed through the Senate to give a mandatory sentence for offenders.
Joy Smith, MP
Winnipeg, MB Member of Parliament for Kildonan-St. Paul
Contact: Andrew Smith, Constituency Communications
smithj0@parl.gc.ca
Posted by ARTSTRADA MAGAZINE at 2:57 AM No comments:

Last project to which Hermann Tilke's name attached was a country club for enthusiasts that got a red flag from economy. TILKE GMBH & CO.
Enlarge Photo The Shanghai International Circuit in China, designed by Hermann Tilke, has received mixed reviews since Formula One racing began there in 2004 because of its 16 corners and two long straights.

TILKE GMBH & CO.
Tilke had unique challenges in designing the Bahrain International Circuit, such as blowing desert sand in the Mideast kingdom.


READ MORE from the Statesman
Posted by ARTSTRADA MAGAZINE at 4:51 PM No comments:

WINE and our favorite shows that talk about them!

Posted by ARTSTRADA MAGAZINE at 11:32 PM No comments:

Born Into Brothels-Calcuttas Red Light Kids
1:23:21
Born Into Brothels (Calcutta's Red Light Kids) is a 2004 American documentary film about the children of prostitutes in Sonagachi, Calcutta's red light district. The widely acclaimed film, written and directed by Zana Briski and Ross Kauffman, won a string of accolades including the Academy Award for Best Documentary in 2004.


Posted by ARTSTRADA MAGAZINE at 10:32 PM No comments:

Posted by ARTSTRADA MAGAZINE at 1:28 AM No comments:

June 23rd
†
Austin Cyberpunks present Techno-Industrial Artists Nachtmahr and Uberbyte.
On their "Empires of Noise" Tour, straight from Austria and The UK, Nachtmahr and Uberbyte have proven to be two of the Best TECHNO-INDUSTRIAL bands on the planet. And, will be delivering stomping beats at Encore, 611 Red River, on Wednesday, June 23rd. Local Support by Sin DNA, DJ Blue Eyed Devil, DJ Lina X and DJ Juxtatek. 18+ are welcome, $10 at the door.

July 23rd
†
Austin Cyberpunks present AggroTech and Industrial artists C/A/T with guest bands Caustic and CTRL
Front-man of the famous Industrial label Crunch Pod, Ben of C/A/T will be invading Austin with Terror Pounding Beats and sharing the stage with Caustic and CTRL. Spinning The Best EBM, Industrial and Synth are DJ Lina X and DJ Juxtatek. All at Booze Town, on 12th & Chicon, Friday, July 23rd. $10, 18+ are welcome

August, Friday The 13th
†
Austin Cyberpunks & Artstrada Magazine present Texas Industrial Fest
A Unification of Texas Industrial Artists and Performers. 18 bands of all Industrial Sub-genres, 6 Industrial DJs, Fetish Shows throughout the day and night, Fire dancer performances at night, Caged Dancing All Day and Night, and Cyberpunk Visuals and Art. Show up early between 4pm - 6pm and get in FREE, plus a FREE V.I.P. bracelet, which comes with a FREE tshirt, cd and drinks. All takes place at Encore, 611 Red River, All Ages are welcome, $15 for general admission, $20 for V.I.P. pass, get your pre-sale tickets at AustinCyberpunks.com

Posted by ARTSTRADA MAGAZINE at 3:52 PM No comments:

AQUA CHILL 2010
click link for more pics!
Special thanks to those that made this event so fun and successful!