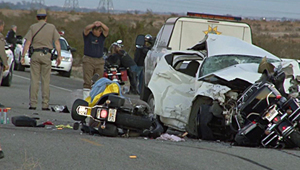 The impatient Honda driver, heading east like the Saddletramps, attempted to pass the motorcycles by pulling into the westbound lane.

A Dodge Avenger, seeing the Honda heading toward it, swerved to the right shoulder, then overcompensated by swerving left, according to the CHP. The driver lost control, sending the car into a sideways skid and ramming head-on into at least six motorcyclists.

Smith estimated that the Honda was traveling 90 to 100 mph when it tried to pass the entire group of motorcycles.

"He came out of nowhere," said Smith, who was riding point and was narrowly missed by the Dodge. "The other car went out of control and then started smashing into motorcycles. It was like bowling."

Posted by ARTSTRADA MAGAZINE at 2:51 PM